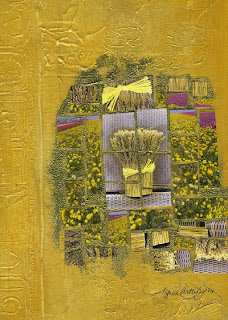 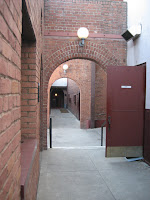 
It's like: never relax, never take that breath, never stop to get that drink of water. You know you can always smell roses when you're running with them in your hand.
Garth Brooks
Posted by ac at 8:30 PM

Your new piece definately says "Goldenrod". It's a beautiful interpretation of the word.

How exciting: a potager garden!! I wish I had room to add one. I'd put it right outside my kitchen window. I have so many different gardening areas in my yard, I just don't have any room left to start a new project! The closest thing I have to a potager garden would be my boysenberries. They do have nasturtiums co-mingling!

i need to stop and smell the roses. angela, how do you manage to look so photogenic in pics!!!! that's not fair!!! :)
love, amanda
:)
amandaromantic.blogspot.com

Hi Angela,
How did it come about that you were asked to present the award? I am just wondering what the connection is? Were you involved in the nomination process?

Hey there,
It's me again. I wonder if you knew anything adout the new disney film"Meet the Robinsons" Its about people in space and wondered if it had anything to do with the Lost In Space.Bye
Cath Jaep
(I wrote a long emial to you a couple of weeks ago.)

SO YOU'RE PAINTING YOUR BIG DINING ROOM BY YOURSELF? VERY GOOD! WHILE YOU'RE AT IT, PAINT A FEW MURAL LIKE IMAGES OF YOUR FAVORITE MOTIFS.

I CONGRADULATE ANNE BRIGDEN ON HER WORK WITH CHILDREN WHO ARE VICTIMS OF BULLYING AND VIOLENCE. I WAS ALSO A VICTIM AND TODAY I WORK FOR A PRIVATE SCHOOL WHICH PROVIDES ROOMS AND MEALS FOR OVER 100 CHILDREN FROM DYSFUNCTIONAL FAMILIES. IT IS VERY TRAGIC TO HERE THEIR STORIES BUT WITH THE WORK OF VERY COMPASSIONATE AND PATIENT TEACHERS AND COUNSULORS THERE IS ALWAYS HOPE.

Here I am in sunny California. On Monday I set aside some time and made my way to The Studio Gallery to see the 4260 Guild Show. It was, needless to say, totally amazing. The studio was closed for the day but Vince and Mardje were kind enough to open the doors. They are just as charming as ever.
The internet does not do justice to the tonal range and quality of the work and I am very happy that I had the chance to see it in person.
Chatting with Vince and Mardje and doing a little shopping made for a great morning.

how great that you were chosen to give the award, angela. :) were you the only choice, or did they have to vote? had you heard of this woman before?
-amanda
:)
amandaromantic.blogspot.com

You are a very beautiful woman and I have been a fan for many years.

I can imagine how honored YOU felt in presenting her award.

Ann is an inspiration.

Loved your interpretation of Goldenrod! Around the corner from us we have the Goldenrod Footbridge that takes us to the beach...it was my mom's favorite walk - as the bridge is overflowing with geraniums cascading down both sides!