On May 31st, 2013 I told you about some art I was making called 'Lineage'. Well I am proud to say they did a lovely article on three of my pieces in the March/April issue of Somerset Studio Magazine which is on news stands the beginning of the month or available at Stampington & Company . (BTW have you checked out the Stampington store online lately...they have so many fantastic supplies and creative stuff...and they ship quickly too.)

The article describes how you can go on a personal journey and create your own lineage artwork.  Here's the three pieces that are in the article Lineage: A Personal & Private Journey, and a few pieces that were not that I wanted to share with all of you. 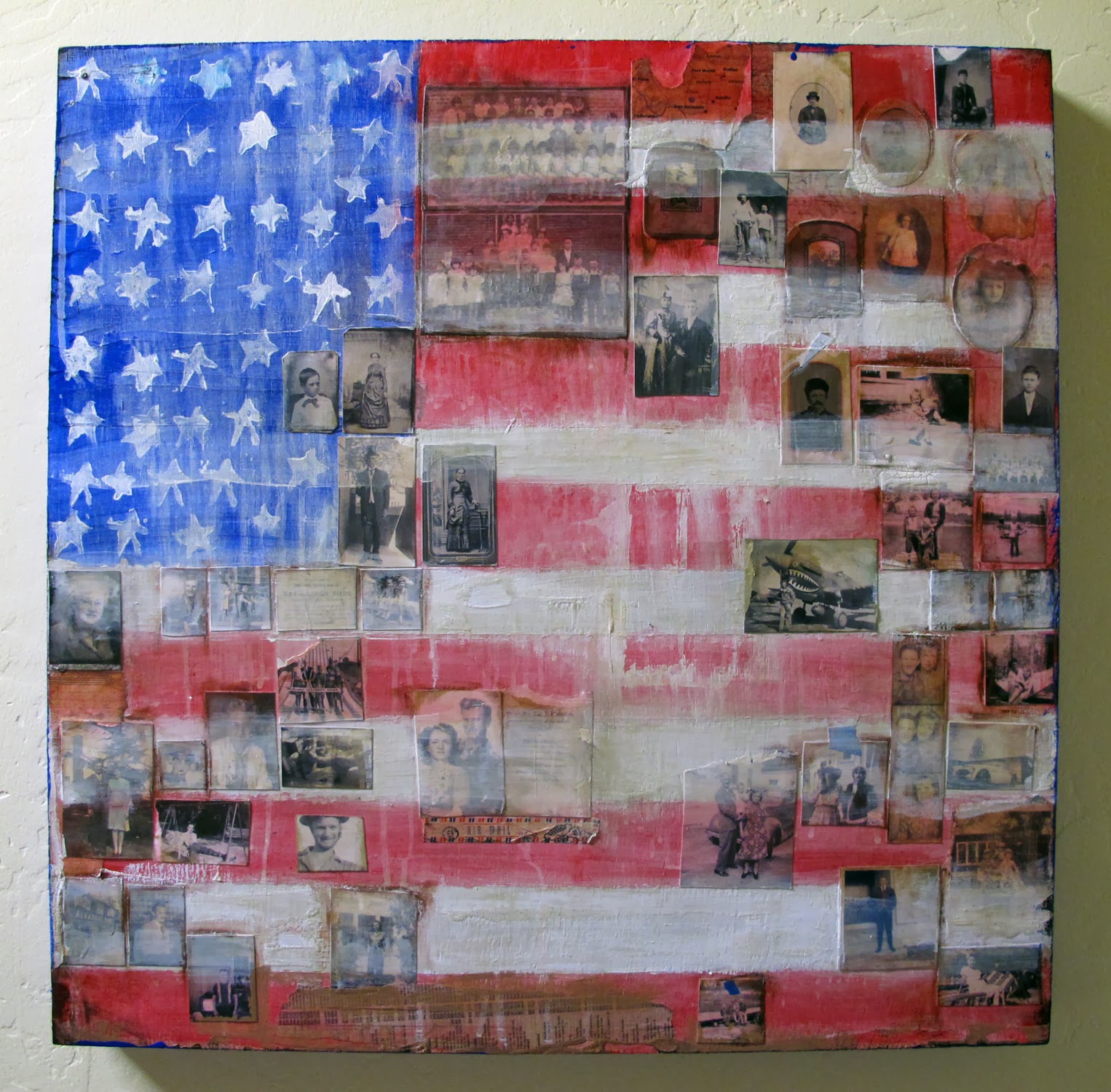 The first piece they showed was a square piece 24" x 24" I made for my husbands birthday of his family that was rooted in Indiana and Kentucky in the USA.

The second piece they highlighted was of my roots which began in Great Britain. I love the Union Jack and this lineage journey actually began because I wanted to have the Union Jack flag displayed somewhere in my home. What better way to display it than adorned with old family treasured photos on this 12 x 24 art piece.

The third piece was one I did for the Polamero/Tunzi family where I used the Greek flag as my background and the families personal photos, passport stamps, maps and ephemera. 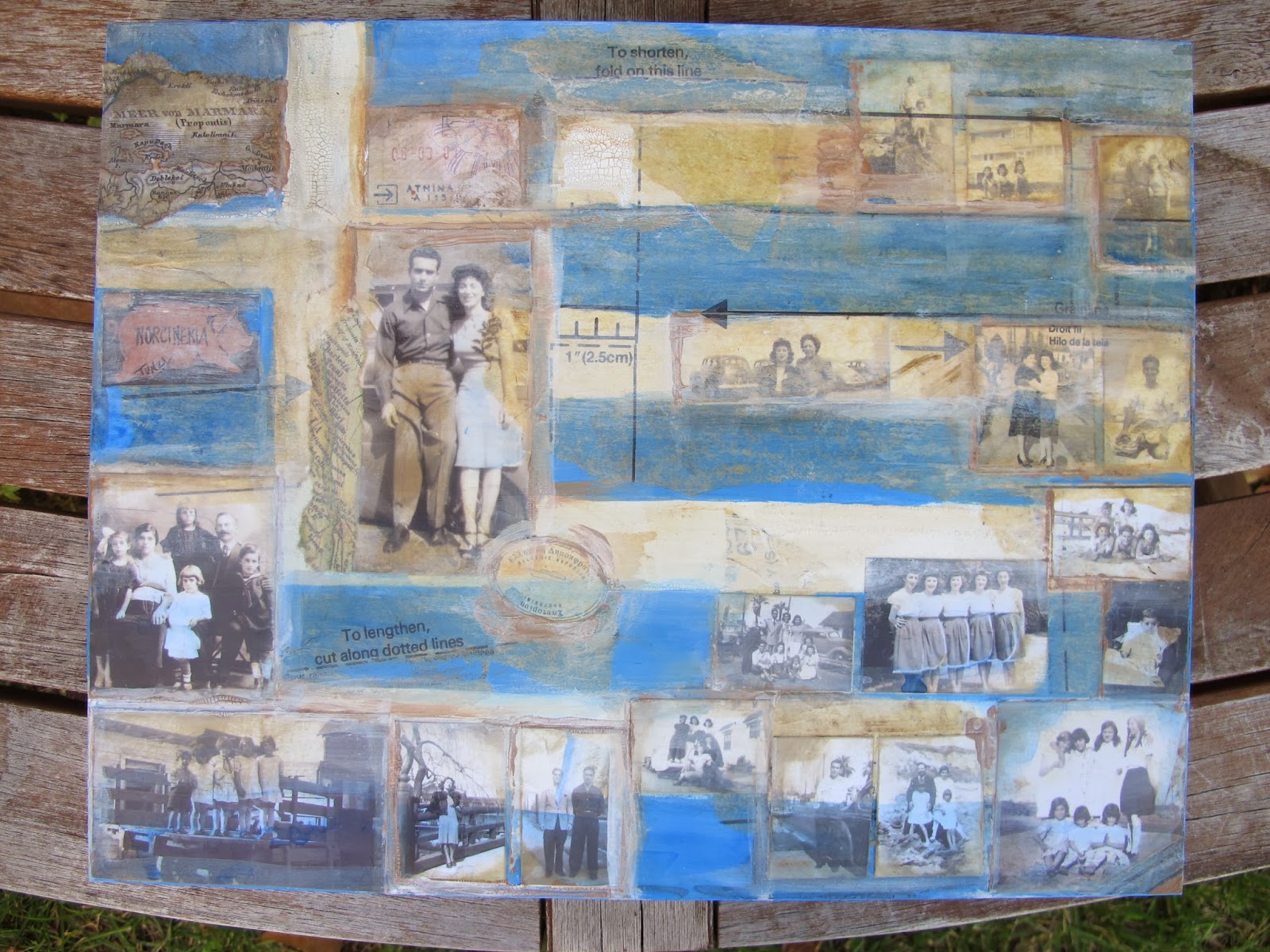 I wanted to share with you a couple more of my Lineage altered art paintings that were not included in the article.

LINEAGE:  Henkle / Freedman
I thought I would point out a few of the special things in this piece. For the background I used the Flag of Wales, the James family crest, and a piece of the James tartan pattern all part of the family roots. These were intertwined with the photo booth picture of Rosemary Henkel that I hand painted, alongside her father’s passport picture. I scratched, distressed and painted with watercolor, acrylic and oil pastels portions of the photographs.


I made this piece in honor of my friend Connie’s mother who passed away when she was just 10 years old. A handwritten postcard from her mothers first trip she took without her children was a memory Connie definitely wanted to preserve. The beehive image was used to symbolize Utah, where her mother lived. A specific memory Connie has was that of her mother constantly crafting - crocheting, embroidering and stitching on the bus she rode home from work each day. I attached pieces of sewing tissue over some of the images as a symbol of her love of handcrafting. 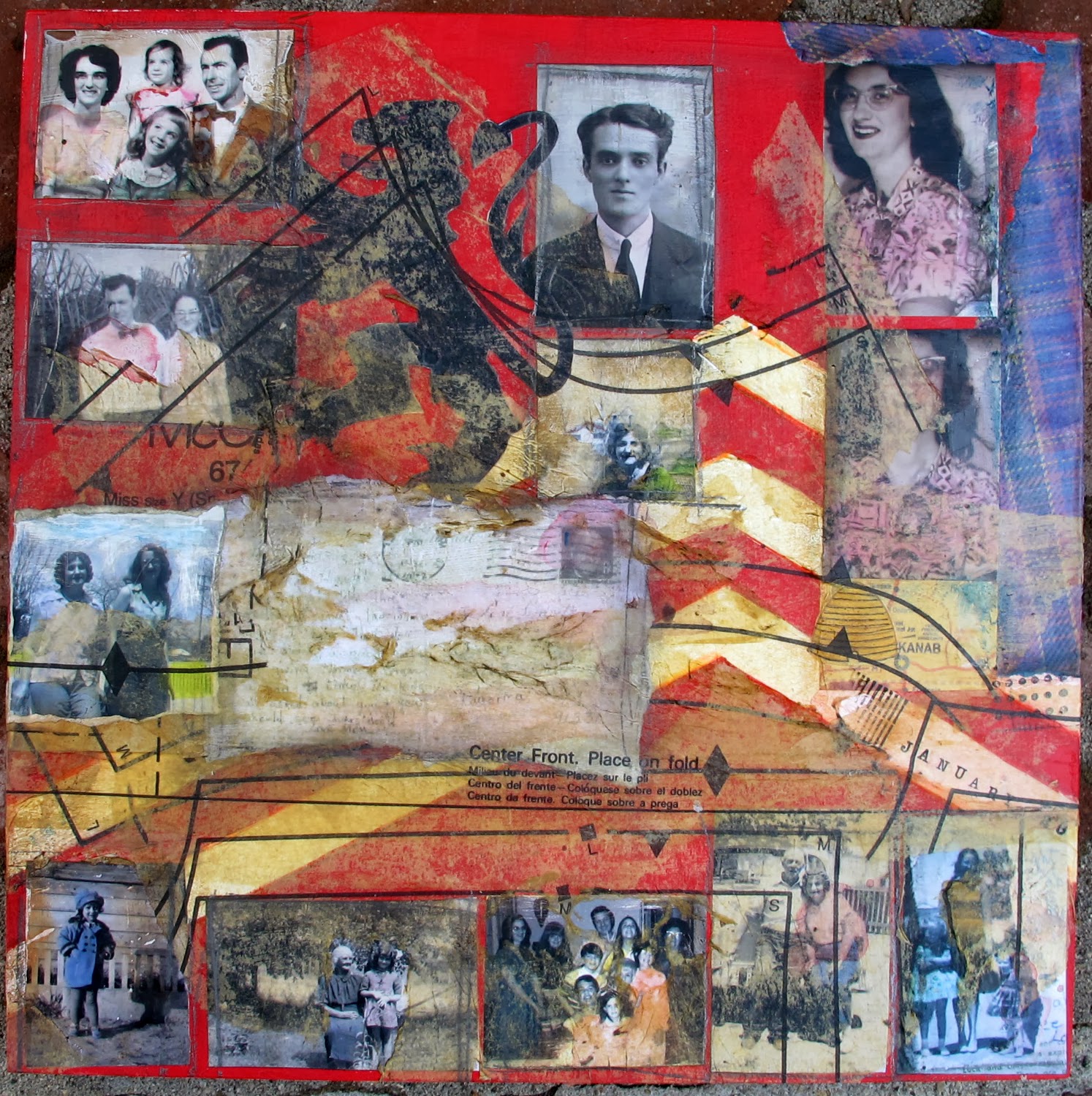 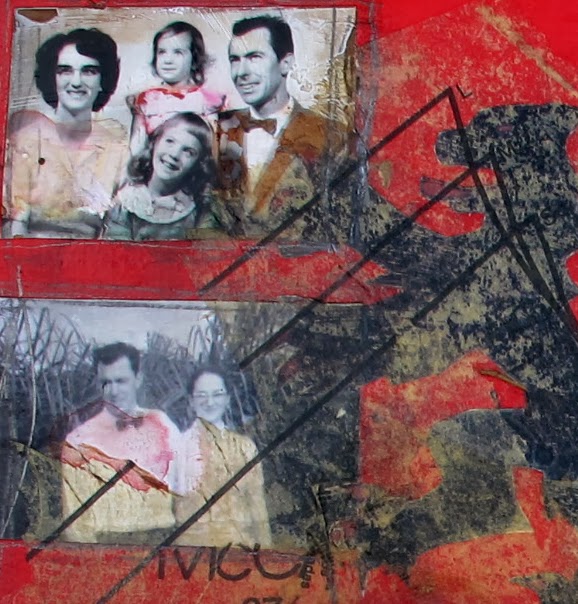 LINEAGE: Brunengraver Sisters / Kessler/Hartz
For this piece the concentration was on the city of Queens in New York.  This is the place where Lena and Jacob German emigrated to from Germany in the 1800’s and resided in Ridgewood, New York  with their five daughters.  Lena Brunengraver owned the Pork Store on Forest Street and was an influential family in the state of New York... so a map of the city streets seemed a perfect background for the family’s treasured images of their Queens roots, home and business. 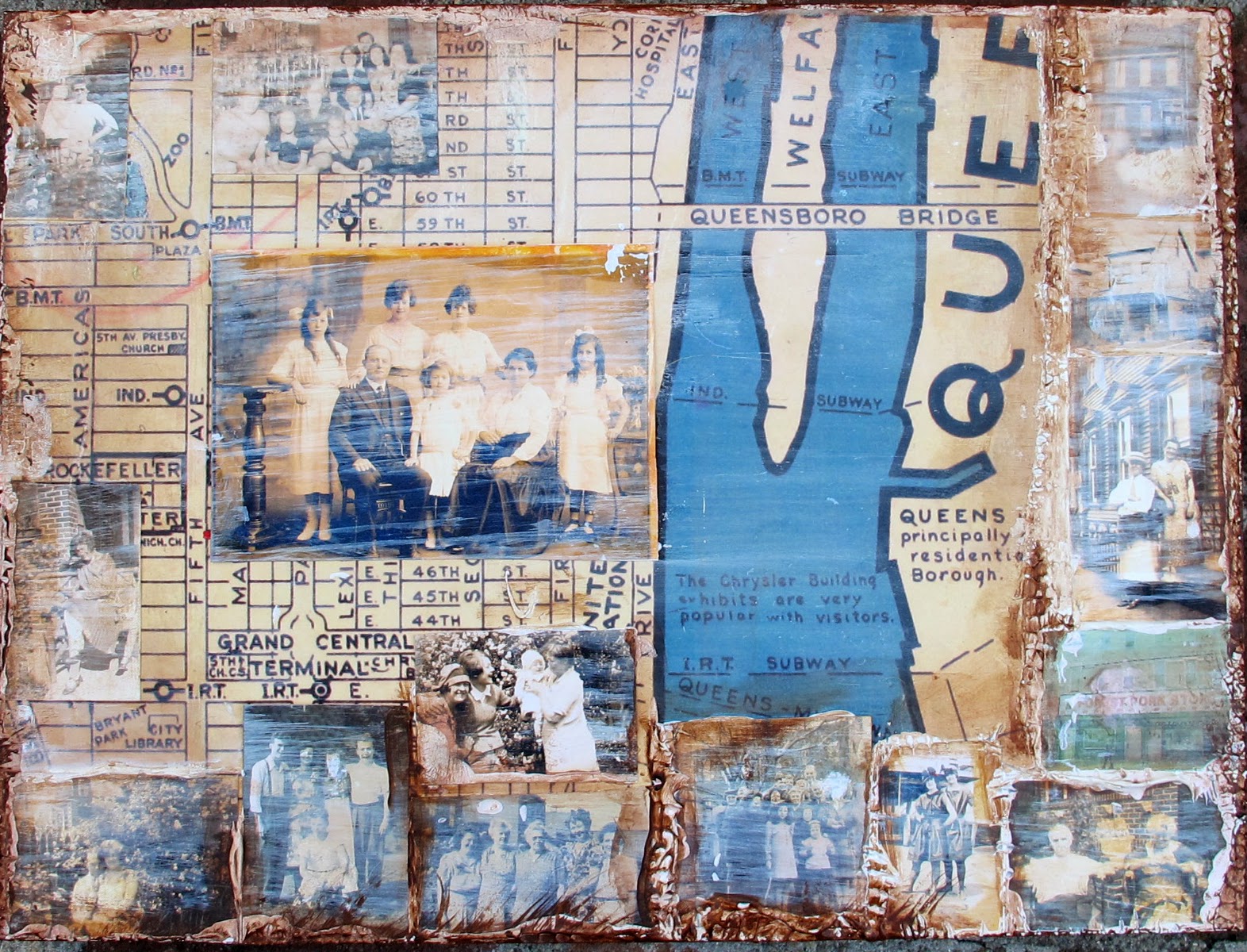 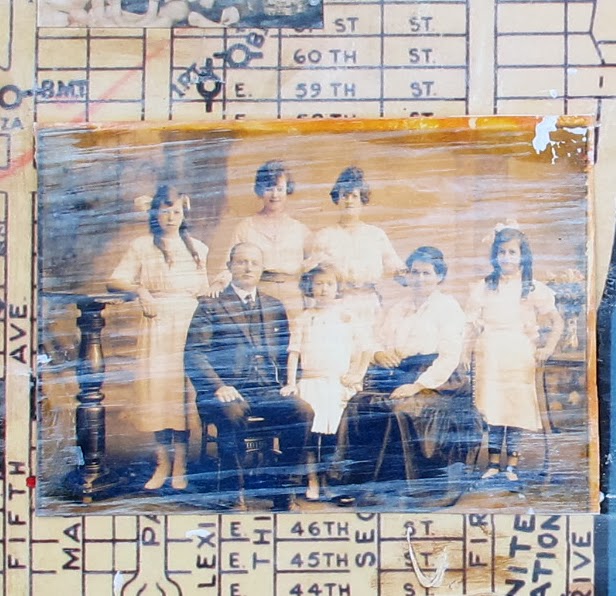 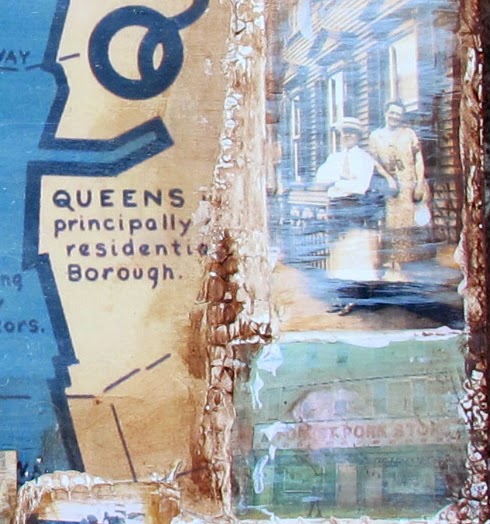 You can see the article in Somerset Studios Magazine on my website by clicking here...
I hope it inspires you to follow your own lineage and display some of those family images trapped in that shoe box.
Posted by ac at 4:32 PM 3 comments: