a few of my favorite things.... 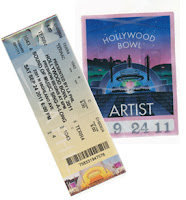 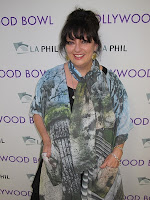 Last night I went to the Hollywood Bowl for the Sound of Music Sing-A-Long.
(btw: my jacket is one of my hand painted Salzburg images taken on a visit to Austria. and made into my art.wear.) 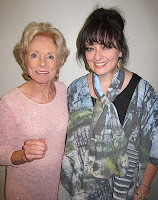 I always love catching up with my von Trapp siblings. Charmian (above) hosts the costume judging on the Hollywood Bowl stage. She has done it every year, (except last year where we were in Chicago filming our Oprah segment Sound of Music reunion.) 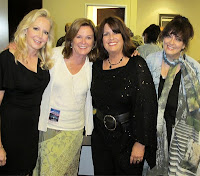 Kym, Heather, Debbie and I get ready in the Green Room. 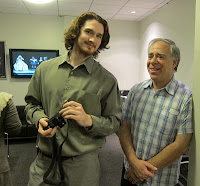 My son Jesse hangs out with Fred Bronson, author of our new book "The Sound of Music Family Scrapbook." which is being released in the USA next year. 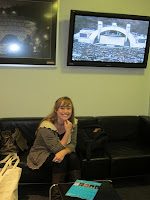 My daughter Becca waiting in the Green Room backstage. 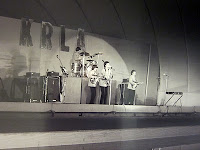 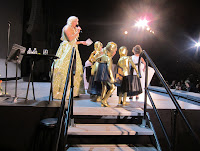 Melissa Peterson hosts the on stage costume party before the movie begins.  Here is our view of the stage before we were announced. 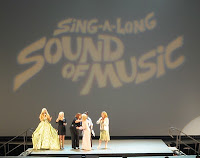 We shared hugs with Charmian...and then we announced our book "The Sound of Music Family Scrapbook" that is being released in the USA in 2011....You can pre-order it here.

We also told the crowd about our Facebook page. Anyone interested in The Sound of Music should 'friend' us at THE SOUND OF MUSIC FAMILY SCRAPBOOK on Facebook...
There is all sorts of exciting news ahead...and you will hear it there first. 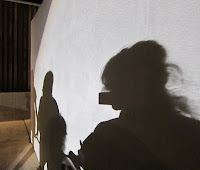 I snapped this shadow pic as I excited the stage behind Heather.

I've seen The Sound of Music hundreds of times, but it always manages to sucker me in...It looked fantastic on that big scene...viewed the way it was originally meant to be seen. After all these years, it really holds up. I think Christopher Plummers clever performance is laced with subtlety. Eleonor Parker, embraces the part of the Baroness' quirks just brilliantly. And throughout the film it shows how much we adored Julie. To hear everyone singing along, waving their cell phones during 'Edelweiss", and hissing at Rolf and the Baroness.  Well it is a downright great time.

How fortunate I was to be Brigitta and a part of this magnificent film. Watching it again last night brought back lots of warm feelings and magnificent memories. 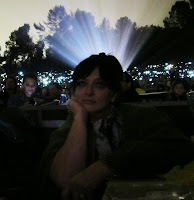 This would have been a treat to see. Thank you for sharing your memories.

LOVE the last picture! Gives a great feel for the atmosphere. You really were lucky to have that role and so nice to hear how much you appreciate it.
CB

Hi Angela, like viewing the pictures and I see one of the shadow of the unruly artist that seem's to follow you around. And again since I live on the East Coast I missed out on all this.

That smile is from ear to ear. I am happy for you and I think sharing YOUR life with your children must be such a pleasure.
That last picture with the 'halo-ish' effect of the back light is an extraordinary glimpse into your fond memories. Thanks for allowing this stranger share in the moment with you.

Yes indeed, you were very fortunate to have had the opportunity to appear in a movie that is such a classic and beloved by so many people. Even today, children are discovering it for the first time and are just as enthralled with it as we were back then. Love your beautiful jacket and matching scarf. Great shadow pic too, by the way.

You've lived an amazing life! Thank you for sharing it with us. Love "The Sound of Music" and you kids looked like you were truly having a great time! "Edelweiss" is one of my favourite songs.

I think The Sound of Music and Gone With the Wind are the most memorable movies in history. They are true classics.

What a lovely evening and a great career memory. But, I am betting that you are most proud of your absolutely gorgeous son and daughter. They are as stunning as their mother.

How exciting!!Thanks for sharing your life with all of your fans!!

You look so dreamy in that last picture! That looks so fun!!

What a Wonderful experience...what a lovely full life... :-)

Hi Angela Here is a link to the friendly skies commercial you did long ago.
http://youtu.be/aDHBbUhh9OM

Here is a link to the fly the friendly skies commercial you did.