Because of some unforeseen circumstances the PEOPLE group show has been postponed 1 week till Sunday the 20th. If you were planning to attend the Artists Reception we hope you can still make it a week later. 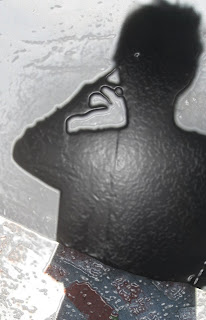 Did you use the Plastic Wrap filter in Photoshop on that shadow? I love those filters. It really takes an image and transforms it in surprising ways.

Don't know where else to put this, but since you love Jack and 24...

LOS ANGELES — Jack's back, at least for a two-hour real-time movie. 24: Exile, Nov. 23, tees up the seventh season, due in January. Kiefer Sutherland and the cast returned from Africa last month and immediately went back to work on the series.

Producers scrapped plans to film part of the regular season in Africa, finding it unworkable to explain the time lapse of a long flight to Washington. But the story line "was current, it was emotional and it really centered around children affected by these wars, from Rwanda to Zimbabwe," who are recruited as fighters, Sutherland says in an interview.

LIVE FROM: Our reporters fill you in on the TV press tour

"The idea of starting out with such an emotional, tangible thing just rooted it in kind of a human element that did not deal in a massive catastrophe, like an atomic bomb or a bioweapon hazard."

Jack Bauer has escaped there after the torment of Season 6 to help an old buddy (Robert Carlyle) who runs a school "that rescues these children involved in these wars and creates a safe haven." As usual, Jack must come to the rescue. This year's baddie is played by Jon Voight, who appears in the movie and then resurfaces midway through the regular season.

The movie, says Sutherland, stands alone, but it also helps "set up the terrorist threat (of the seventh season) and the justification for why this would happen in the United States."

Does the long break — 20 months between regular episodes — risk losing fans? He hopes not. "The entire year of television was so massively disrupted," he says. "I think it was a really smart move by Fox to just wait. It afforded us so much more time, and it's the first time we'll have all 24 episodes completed, in the can and ready to air before you see the first one. Which means you have 24 perfect episodes without running into trouble."