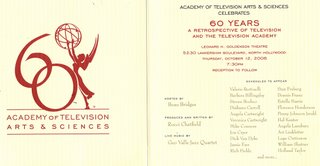 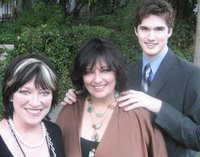 On Thursday night my sister Veronica and I (escorted by my son Jesse)appeared at the Academy of Television Arts and Sciences 60th Anniversary. The event was hosted by Beau Bridges and took place in the theatre where it was packed to capacity. The evening was filled with tv clips and actors reminiscing about the last 60 years. It was so much fun to see Dick Van Dyke and Art Linkletter both as sharp as a tack, both of whom I worked with as a child. 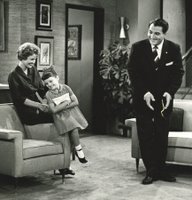 They showed a clip from "The Danny Thomas Show" and one of Veronica from "Twilight Zone" and we spoke about our show biz past. It was a fun evening filled with memories. 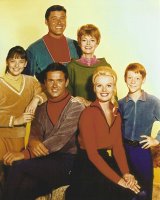 There is a reunion of the "Lost In Space" cast going on this weekend October 14th and 15th at the "Hollywood Collectors & Celebrities Show". Bill Mumy, Marta Kristen, Mark Goddard, June Lockhart, Bob May (the robot) and I will be there. All of us together doesn't happen very often. Hope you can come by and say hi. For me it is a double reunion as Heather Menzies Urich (Louisa) Kym Karath (Gretl), and Marni Nixon (Sister Sophia) from "The Sound of Music" will also be there, I think. Should be a fun weekend.
Hollywood Collectors & Celebrities Show
The Hilton Burbank Airport Hotel & Convention Center
2500 North Hollywood Way
Burbank, California 91505
Saturday Sunday
October 14th, 2006 October 15th, 2006
10:00am - 5:00pm 10:00am - 4:00pm
'OPEN' to the general public. 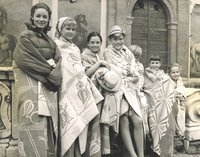 That's great, Angela! I really wish I could be in California this weekend. Please, take some pictures and post them on your blog? Thank you!
Have lots of fun!
Aline.

have a great time today and sunday with your reunions. i watched the reruns of lost in space and make room for daddy. loved them. :)
-amanda
:)
amandaromantic.blogspot.com

I wish I lived in Cali =( I'd definitely love to go to a "Hollywood Collectors & Celebrities Show" sometime; they sound like they'd be a blast! That's great that you still keep in touch with people from your television & film past. I would love to see Dick Van Dyke in person - he's one of my all-time favorites! Just curious, I've never read anything about Bob May as the Robot - was he a child actor when he was the Robot, or an adult? In any case, he did a fabulous job! "Lost in Space" was my favorite show when I was little =)

hope today was a fun day with the different reunions, angela. :)
-amanda
:)
amandaromantic.blogspot.com

Angela, it was nice seeing you, Heather, Bill, Marta, and June today (Saturday) at the Celebrities Show. The faux peach is on the mantel. I hope you'll enjoy the Carp DVD!
;-)
-j

My god, you all look so good ! Dick did a voice for an animated film I worked on and he came in and he was so incredible. The crew just adored him (and in case you didn't know Mr. Van Dyke does his own 3D animation, amazing ) . Love the altered books by the way , really beautiful Angela. You are a creative force. Cool blog :)