they just don't do it the same these days.... 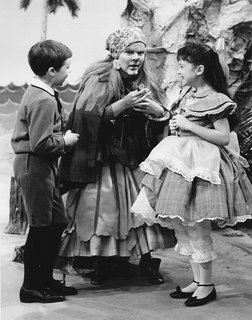 Well tonight I had a few laughs. My husband had brought home 'Babes In Toyland' that he had bought for me on Amazon. They have released the 'Shirley Temple Storybook Collection' on DVD...and many, many years ago I had played Jane in this production of Shirley's Storybook for television. I had forgotten all about the spider forest, Meantown, Shirley as the witch Floretta and that lullaby I sing to my brother, Michel Petit, in the jail cell (what a riot)...It starred Jonathan Winters, Shirley Temple, Jerry Colona and Joe Besser and they were colorful characters and my memories of making this production have all come back to me...It was 'Live' television and that meant there was no stopping for anything...and I remember a few things going wrong...like the mast on the boat was tipping over on us and the director kept telling us when to stop and start from offstage...Anything can happen when you do a show live, straight through from start to finish. I was about 7 years old I think and it was really funny for me to watch. I can't wait to have my parents see it...They just don't make television like that anymore. 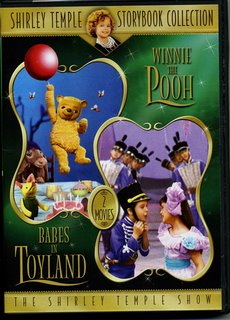 Love your dress in it, Angela!! Too cute for words!!!
I just bought a baby doll dress with the bloomers and can't wait to alter it...what I'm going to do with it-I dunno yet!

Do you remember doing the live show, or is it all a blur to you? It must be like watching home movies. You were so adorable as a child. I've seen so many reruns of Danny Thomas having been born in 1974. And of course, Lost In Space. And my fave-The Sound Of Music. But playing Linda in Make Room For Daddy, you were just too cute for words.
-Amanda Brooks
:)

Angela- you are so right! Those TV days were the best. They really DON'T do TV like that now! I always look forward to your posts about your memories, because they bring back to me the days when there were only 3 channels, and my family would glue ourselves to the TV every night. You are so much a part of my warm memories! Thank you.

Thank you Angela for sharing that! For so many of us who grew up watching you perform so well, it is a real thrill to now read your reminiscences. THANKS!

I vaguely remember watching the Shirley Temple Storybook Hour - I was about your age, so don't recall much. I do remember lots of relatives making it a point to watch it one particular evening, because it was advertised that Shirley's own children would be on the show.

I enjoy reading about your memories and what you are doing now. Thanks for sharing with us.
pattisl

Well Hi Angela. I am an ardent fan all the way from Singapore. Hope you are doing well. :)