diamonds are a Queen's best friend... 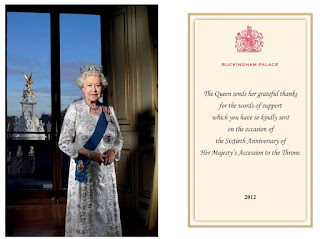 It’s the Queen’s Diamond Jubilee… and 60 years ago on June 2 1953 when Queen Elizabeth rode down the streets of London in her carriage…I was there… really I was… in my baby buggy...at the Queens Coronation… my sister sitting atop my Father’s shoulders (she swears she remembers the procession) … my Mom waving the Union Jack…

And here it is 60 years later… Of course I’m celebrating… I sent the Queen a birthday card... and she sent me this Thank You note back.  And even though it was a PDF file... I remembered how good a thank you note can make you feel. You can send a message to Her Majesty too... go here... it feels pretty darn swell when she writes you back... After all... she is the Queen... and she does rule over 15 Commonwealth Realms in addition to the UK... and she takes her job very seriously... and she's polite... and I hear she's a good listener... and I don't think she's mean spirited... how I wish a little of that would rub off on our citizens and politicians here in the USA...

1. She doesn’t have a passport.
Despite being history’s most widely traveled head of state—she has reportedly visited 116 countries during her 60-year reign—Elizabeth does not hold a passport. Since all British passports are issued in the queen’s name, she herself doesn’t need one. She also doesn't require a driver’s license, though she has been known to take joyrides around her various estates in her Range Rover.

2. She has two different birthdays.
The reigning British monarch was born Elizabeth Alexandra Mary of York on April 21, 1926. However, each Commonwealth country traditionally celebrates her birthday on a designated day in May or June. In the United Kingdom, for instance, it falls on the first, second or third Saturday in June. Britain has officially marked its sovereign’s birthday since 1748, when the event was merged with the annual “Trooping the Colour” ceremony and parade. Elizabeth spends her real birthday enjoying private festivities with her family.

This is just plain weird.  Why so many birthdays? Does she get confused on how old she really is? I am not sure I would want two birthdays… too many birthday celebrations for me, plus I think I would feel twice as old. Sometimes I celebrate an un-birthday but I'm pretty sure that's not what they are doing here...

3. She drove a truck during World War II.
After months of begging her father to let his heir pitch in, Elizabeth—then an 18-year-old princess—joined the Women’s Auxiliary Territorial Service during World War II. Known as Second Subaltern Elizabeth Windsor, she donned a pair of coveralls and trained in London as a mechanic and military truck driver. The queen remains the only female member of the royal family to have entered the armed forces and is the only living head of state who served in World War II.
I think this is pretty darn cool… the British pitch in spirit...

4. She paid for her wedding dress with ration coupons.
Princess Elizabeth married her third cousin Philip Mountbatten, formerly prince of Greece and Denmark, on November 20, 1947. Held during the postwar recovery years, their wedding was a relatively understated affair, at least compared to the lavish union of Prince Charles and Lady Diana Spencer in July 1981. With austerity measures still in effect, Elizabeth had to save up ration coupons to purchase the material for her wedding dress, an ivory satin gown designed by Norman Hartnell and encrusted with 10,000 white pearls.
I am sure this made her appreciate her wedding that much more…

5. She didn’t take her husband’s name.
Elizabeth’s father, George VI, was born into the House of Saxe-Coburg and Gotha, but during World War I the family name was changed to Windsor amid anti-German sentiment. Similarly, her husband Prince Philip dropped his father’s Germanic surname, Schleswig-Holstein-Sonderburg-Glücksburg, and adopted that of his maternal grandparents, Mountbatten, during their engagement. But when Elizabeth ascended the throne, her mother and Prime Minister Winston Churchill did everything in their power to prevent the queen and her line from becoming the House of Mountbatten. They succeeded, but several years later Elizabeth proclaimed that some of her descendants would carry the name Mountbatten-Windsor—probably in an attempt to placate her fuming husband.
A rose by any other name would smell as sweet… but I feel bad for Phil...

6. She sent an email in 1976.
On March 26, 1976, Queen Elizabeth sent her first email while taking part in a network technology demonstration at the Royal Signals and Radar Establishment, a research facility in Malvern, England. The message was transmitted over ARPANET, the forerunner of the modern Internet. She is considered the first head of state to have used electronic mail.
FYI...The Queen also has a twitter, facebook and youTube accounts… which says the monarchy is trying to update their image and live in the moment... jolly good indeed. 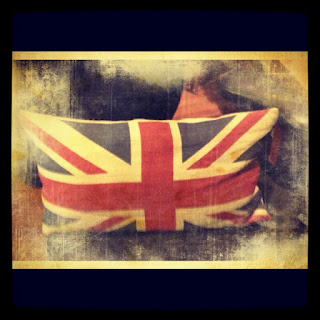 I really enjoyed this, Angela! I greatly admire the Queen. I remember watching the coronation on black and white tv at the neighbor's house. We didn't have a tv back then. The whole thing was quite a novelty. Thanks for the interesting post!

What an fascinating post! I loved reading all the interesting facts about Queen Elizabeth. Thank you for sharing. And how wonderful that you were there for her Coronation.
Blessings,
Kim

Angela, the Jubilee has been such a boost to Britain this week, our road had a wonderful street party, all dressed in red white and blue, I was the official photographer for the day. The whole nation celebrated and it really did bring people closer together. I am very proud to be British and extremely proud of my, and your, Diamond Queen, she's such an inspiration..

Interesting stuff about the Queen! I can imagine you felt proud to be British this weekend. I'm not British but I love the UK and everything British and travel there whenever I can (I live in Holland so that's quite easy). I was wondering if the people from outside Europe who watched the concert for the Queen on TV recognized all the artists, like the English singer Robbie Williams who is huge over here (and who opened the concert)but not so much in America I think and his pal Gary Barlow who composed a special song for this occasion?

Indeed, God save the Queen! Very nice tribute to Her Majesty, Miss C.

I've always respected her. She had such a large responsibility, at such a young age, like the first Elizabeth, whom I also love and respect. i've read and seen everything ever done about Eliz. the 1st.
Take care Angela,
Leslie

I just came back from England today. Spent the last week having fun with all the jubilee celebrations!

Thanks for the interesting info on the Queen, which I have always greatly admired. I was born just a few months before her coronation, so she is the only British monarch I have ever known. My mother saw the Queen's parents when they visited Canada in 1939. As a Canadian, I grew up seeing her face on our coins, our paper money and our stamps. As a stamp collector, I got to know all of the other countries of the British Commonwealth. I grew up in an old neighborhood in Canada's capital called New Edinburgh, which is very reminiscent of England, with it's many old turn-of-the-century homes. I lived only a few blocks from the Governor General's residence (the Queen's representative in Canada.

I must say, I do miss our old Canadian flag, which resembled the Brithsh flag a lot more than the one we have now. I chuckled at you drinking more tea these last few days/weeks, as I've been doing the same thing myself, especially while watching the jubilee celebrations on TV. Cheers Angela!

While I'm not old enough to have been there for her coronation, I still remember when the Royal Family visited Melbourne, Australia in the early 70's - I was so excited to see them sailing on the Britannica.