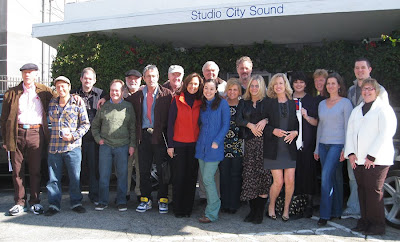 I did the voice of Wow Cow today for a cartoon titled "Special Red Dress". It's a Christmas tale meant for the young crowd that should be airing later this year. I love doing voice work...and this was with a great group of people...you might recognize some of them.
Posted by ac at 8:52 PM

That had to be a blast. Good on you! Looks like a fun group.

Cool. I ways thought it would be neat to do a voice for a cartoon.

Sorry, the only two I can recognize in the pic is Jon Provost from Lassie. The other one is on Jon's shoulder. I believe he (it/she) starred in only one movie in 1963 , "The Crawling Hand". Other than these two I..... oh yea... the lady on the far right in the whie jacket looks like my insurance agent....HI NICOLE!