a return from heaven... 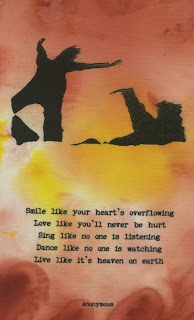 This morning as I sat and drank my morning java...I saw the 'Endeavour' land safe and sound after it's long journey into space. 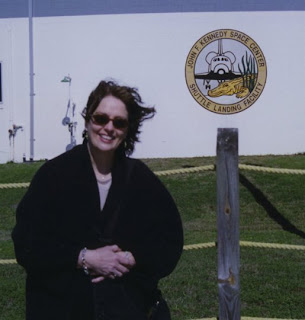 I remembered a fantastic experience I had in 2001 when I visited NASA and the Kennedy Space Center I saw the 'Endeavour' up close and personal and under construction. The flight of this space craft was a dream waiting to be fulfilled...and here it was 8 years later, landing after a successful flight in the heavens. 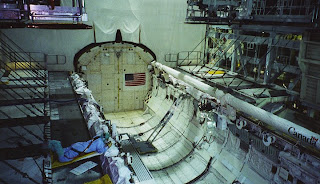 On Monday, March 5th, Marta Kristen, Bill Mumy, his son Seth, my son Jesse and I were given a grand tour of Kennedy Space Center. The 'Endeavour' was being constructed for its future mission in space. It was an awesome sight. 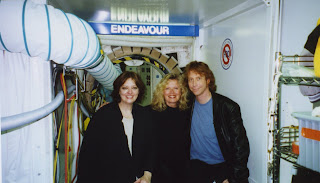 We also saw the arrival of the space shuttle 'Atlantis' riding piggyback on a 747. We were given a crash course in a shuttle trainer plane by astronaut Charlie Justiz and we chatted with the guys in the mission control area, many of whom were 'Lost In Space' fans. We also got a good look inside the 'Discovery' as it was being prepared for it's lift off a couple of days later. (I remember thinking how small it was inside.) And we also gathered below the 'Discovery and looked up as it stood boldly on it's launch pad.

I'm so glad Jesse got the share this moment in history with me as we got to lie inside the Endeavour. 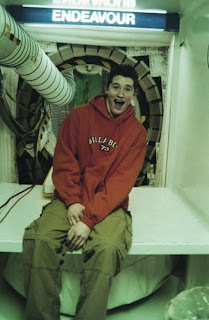 Bill, Marta and I were also asked to 'sign the wall'...I signed my name right below Margaret Thatcher. 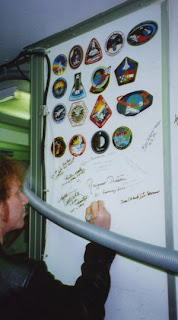 The highlight, however, was seeing the actual launch of 'Discovery' on March 8th 2001. That was something I'll never forget. It was a perfect launch, taking off on schedule at 6:45 am into a beautiful sunrise. 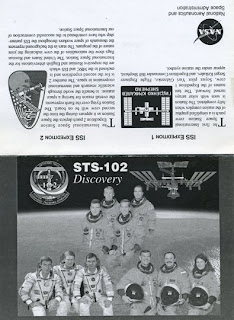 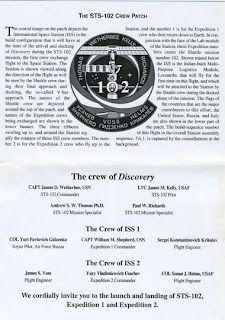 I can't even tell you how exciting it was. The energy of everyone in the stands holding their breath enveloped you in all this positive energy. We watched as the big clock did the countdown and then the earth rumbled beneath our feet and a blast of hot air blew over us as 'Discovery' took off into the beyond. It was amazing.

After the launch we were invited to join everyone at mission control in their celebratory 'beans and cornbread', although it was a bit tough on the stomach at 7 am for us... 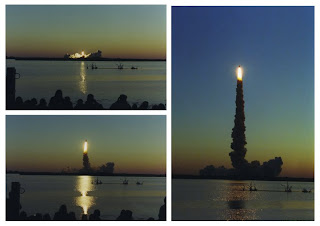 Those we met at NASA shared with us their excitement about what they were accomplishing. We were told more than once how 'Lost In Space' had propelled them into the space program and continued to be amazed at the impact that show had on people and how it captured people's imaginations. Many thanks to Astronaut Charlie Justiz, Louie Garcia and all the others that made this all happen. 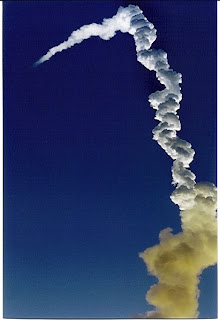 This black and white picture is one of my earlier shadow pix...It's Marta and me jumping for joy on the Kennedy Center tarmac...It had inspired me to print it on silk (as seen at the top of this post) and add to the quote that captured this experience so perfectly... 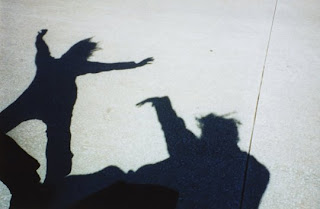 Very cool!!! It must thrill you to think that Lost in Space inspired to many to enter the space program!!! Alot of fans out there!!!:>)

you never cease to amaze me!

Thank you for this great post! I still remember my mother's excitement when she described a shuttle launch... my dad worked on the Hubble Space Telescope, so they were invited to Florida. I'll have to ask him if he watched "Lost in Space" too ;-)

You are lucky to have seen The Endeavour. That is wonderful that Lost in Space has inspired so many.

That's too cool. One of these days the space shuttles will probably look like the Jupiter 2. I remember seeing the space shuttle Challenger riding piggy back on a 747 while driving to work in 1986. I couldn't believe it. Then later on the news it said the 747 made an emergency stop at Eglin Air Force Base near here for fuel or something on its way to Cape Canaveral. I will always remember that sight. Seeing the space shuttle on top of the 747. It is an awesome memory but sad in that Challenger was on its way to disaster.

Thanks for sharing those special memories.I just love your blog and enjoy it so much.